CaliforniaCarbon.info, December 19, 2016: In record-breaking news for California’s cap-and-trade program, over 13 million registry offset credits (ROCs) have been awarded to The Confederated Tribes of the Colville Reservation and Finite Carbon for an Improved Forest Management (IFM) project in Washington state.

Spanning an area almost half a million acres in size, on land held by the Native American community, Colville IFM (ACR255) will become the program’s largest ever project, surpassing Encourage Capital and The Forestland Group’s Wyoming IFM project (ACR249) which was awarded 5.2 million ROCs in October this year. 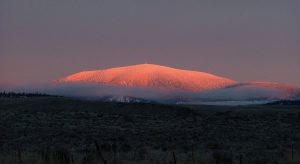 When approved, the project will generate a total of 13,453,750 credits, a significant contribution considering only 50 million CCOs have been issued so far. 1,894,288 of the credits generated will be held in the buffer pool for forestry reversals. BP has agreed to purchase the credits over a 5-year period, providing the Tribe a steady revenue stream.

‘With a project of this size, you want to make sure there will be someone to buy that supply.’ said Cody Desautel, Colville’s Natural Resources Director. Reciprocally, guaranteeing the sale of credits by BP enables them to purchase credits over a long period of time in a cost effective manner.

The location of Colville IFM in Washington state is also of significance to BP, a large portion of their Californian emissions accruing from fuel sold in California by a refinery in the State.

Responsible for over 6.8 million CCO-8s available on the WCI market, Finite Carbon is the project developer behind last weeks’ record breaking ROC issuance. Providing their technical expertise and upfront capital, Finite Carbon has worked with a wide range of clients, generating a total of 23.7 million ROCs over 11 different sites making it by far the largest project developer in the program.

‘Tribal communities have a deep connection to their land and commitments like offset projects are very thoughtfully considered for their potential social as well as economic impact across many generations’ said Sean Carney of Finite Carbon speaking on the difference of working with different landowners. ‘Unlike commercial land which regularly changes ownership, Tribes know their descendants will own the land in 100 years’ time and beyond. Anything they bond their descendants to they take very seriously’ added Carney, highlighting the diligent approach needed in working with Native American partners.

Considering the majority of tribes inhabit rural areas, participation in California’s cap-and-trade program can provide important revenue streams in areas otherwise limited in economic development opportunities. ‘A source of revenue like this is very important not just because it helps support tribal budgets and natural resource management but also to help fund capital improvement projects that meet a lot of our community’s social needs’ said Cody Desautel on the benefits of the Colville project to the Tribe.

Listed in October of last year, Colville IFM was registered under the 2014 forestry protocol. Changes to the protocol in November last year, however, have severely limited the opportunity for further forest carbon projects. Only a single project in Alaska, the Finite Carbon – Sealaska Native Alaskan IFM Project has been listed since the change.

‘It is a little disappointing that it’s becoming more difficult for landowners in general to participate, but especially for rural and economically disadvantaged tribes’ said Desautel on the changes to the protocol. Currently six tribes across the US have benefited from carbon revenues under the program whilst other tribes coming behind may not be afforded the same opportunity.

Colville’s ROCs now await ARB approval, a process which has taken on average 97 days for forest carbon projects. As it stands 22.1 million credits await ARBOC issuances. ARB’s next issuance announcement will take place on the 29th of this month.

Policy Perspective by Jon Costantino 2022 Scoping Plan – What did we learn last week...