Summary: For the third consecutive time Ontario’s carbon market has witnessed a fully subscribed current auction and also for the first time the advance auction was fully sold out. The auction, which took place last week, cleared 25,296,367 allowances in the current auction with a subscription ratio of 1.19. The current vintage credits cleared at a settlement price of CAD 18.56, CAD 1.77 above the auction reserve price. The advanced auction, in a first for the Ontario carbon market, was fully sold out clearing 3,116,700 allowances with a subscription ratio of 1.53 and clearing at CAD 18.03, which is CAD 1.24 above the auction reserve price. After around two and a half months of inactivity in the secondary market, the positive results released today indicate that Ontario’s carbon market is in full swing with healthy demand for allowances.

No. of Qualified bidders: 59 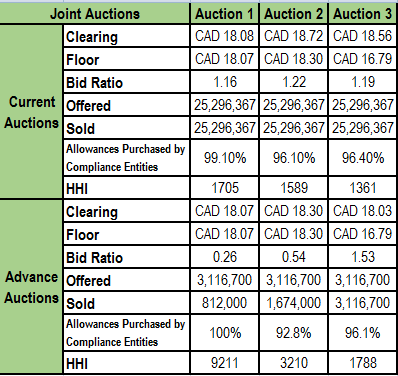 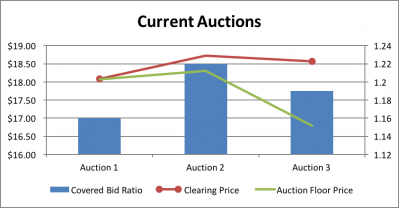 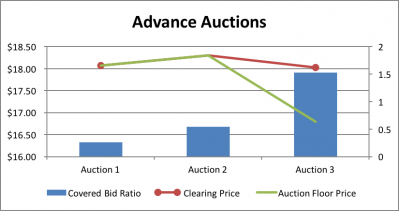 (All prices in CAD in above graphs)

Building on Ontario’s second carbon auction in June, the September auction had a discount of CAD 0.16 to the program’s second auction in terms of settlement price. Due to a deflated exchange rate and a floor tied to that of the WCI, Ontario’s Auction Reserve Price stood at CAD 16.79 prior to last week’s auction. Conversely, the last auction’s reserve price was CAD 18.30.

With the secondary market being devoid of activity since the 22nd of June, a sold-out auction was anticipated by many on the market. This was based on the idea that the market participants were looking forward to buying allowances from the auction at a lower price instead of the secondary market. Based on CaliforniaCarbon.info’s analysis, Ontario’s stand-alone market will have an annual surplus of 1.2 million allowances should the remaining auction of the year also clear. With the declining cap, however, emissions are projected to transcend the number of allowances as early as next year. Unsurprisingly, participants have shown a strong tendency to obtain allowances in this year’s auctions before the Auction Reserve Price rises to meet next year’s floor price and prices on the secondary market follow suit.

The anticipation of linkage with the WCI continues to sustain Ontario Carbon Allowances (OCAs) prices at par with that of California Carbon Allowances (CCAs). Based on the exchange rate used at time of auction, the OCA cleared at a discount of CAD 0.18 to WCI’s clearing price in last month’s auction.

The advanced auction was fully sold out with a subscription ratio of 1.53. The rise in interest in future instruments, increasing with each successive auction, indicates to the positive market sentiment with traders willing to hedge on future options. The certainty brought about for cap-and-trade in future linkage partner California with the help of AB 398 is a factor that potentially may have also piqued the interest in future allowances.