CaliforniaCarbon.info, August 25, 2015: The fourth California-Quebec joint auction for carbon allowances held on 18 August cleared the entirety of the 83,860,860 allowances offered (73,429,360 V2015s and 10,431,500 V2018s). Both the current and advance auctions witnessed comparatively high clearing prices compared to the last auction, causing the auction to provide a positive price discovery for the secondary market which has been on a steady positive trend in recent weeks.

The current auction cleared at price of $12.52, $0.42 over the auction reserve price, with a bid-ratio of 1.28. The spread between the clearing price and the broker aggregated spot prices on the day of auction was narrower this time around at $0.14 compared to $0.25 during the May auction; the current auction clearing was also $0.23 higher than last time.  It is likely that the auction results will serve to exert upward pressure on the near term deliveries of the V2015. A trader speaking to CaliforniaCarbon.info quoted, “The current auction clearing reads bullish for the secondary market. We can expect the spot to rise further by a few cents in the coming days.” The positive price signal coming from the current auction could also mean that the V2015 Dec15 delivery could breach the expected reserve price in 2016 ($12.80 considering 1% inflation) much sooner than it did last year, which in turn might see the November auctions clear high. 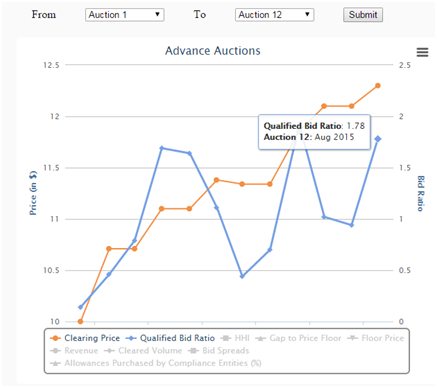 Similar to what transpired during the May auction, funding rates for V2015 Dec15/16, currently at yearly lows of near 3.2%, are likely to receive a boost from the incoming spot volume, as some of the winning bidders will look to engage in carry trading.

The advance auction cleared at $12.30, with a gap of $0.20 over the floor and a bid ratio of 1.78. This is in sharp contrast to the previous advance auction in May, which was undersubscribed.  Prices and funding rates for V2018 deliveries fell following the negative price discovery provided by the third joint auction. Another trader speaking to CaliforniaCarbon.info commented, “Carry costs were quite low on the V2018 up to a couple of weeks back, and a few traders saw this opportunity and capitalized on it. Some have realized this a bit late and might be looking to take positions, but that boat has sailed now.”

The high clearing in the advance auction is likely to provide slight upward pressure at the front of the V2018. However, little liquidity could be seen on the vintage if entities look to hold onto the allowances and carry them internally. Over 93.6% of the V2018s offered were bought by compliance entities.

Although the August auction featured fewer qualified bidders, the covered emissions for 2013 represented by these entities was actually higher by 10,155,069 MMtCo2e. The ten top emitters in the program such as Tesoro, Chevron, Southern California Gas Company, PG&E, Phillips 66, etc., all qualified to bid in this auction. 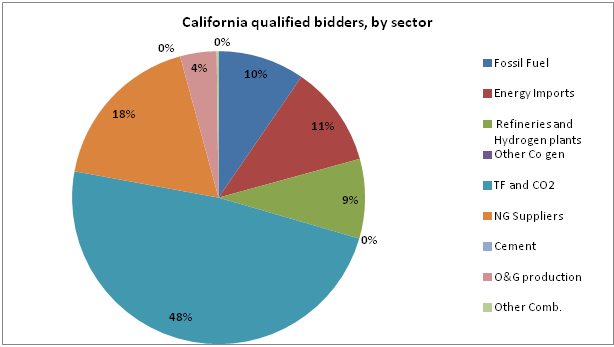