Last week ARB released a white paper (link here) detailing its progress on Clean Power Plan compliance in relation to regulation over mandatory greenhouse gas emissions reporting. The paper is to be formally discussed at a public workshop on Wednesday of this week.

After the announcement of the Supreme Court’s ‘stay’ verdict on the Clean Power Plan, many other states of the Union have frozen their respective CPP compliance schedule until the plan is legally confirmed. However, in the spirit of Mary Nichol’s February 10 announcement that California’s climate efforts would remain unchanged by the verdict, ARB is maintaining their current course on CPP compliance. Nevertheless, the verdict may have at least partially assuaged the urgency with which ARB was forcing through the 2030 Target Scoping Plan; the initial intention was for the scoping plan to coincide neatly with CPP submission. Following this line of logic, the case against delaying the Scoping Plan in the ongoing EJAC – ARB negotiations may have been marginally weakened.

In line with all previous signals and expectations, the ‘state measures’ option is favoured by ARB in the white paper, emphasis is understandably placed on continued reliance on the cap and trade program. The principle alterations to the program necessitated by CPP compliance are to the dates of compliance periods after 2020, and to the emissions reporting schedules. The beneath graphics are from a December 2015 presentation to ARB’s Board, but after examining this recent white paper they seem to be equally valid now as ever. 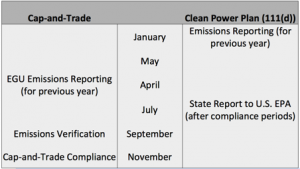 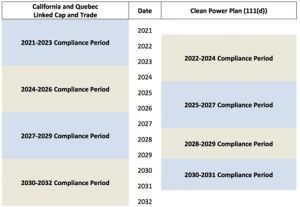 ARB currently plans to make these CPP amendments within a broader package of revisions during the 2016 calendar year. However, if the expected delays to the adoption date of the Scoping Plan come to roost, it seems problematic as to how post-2020 amendments could be made to the cap and trade program without its very existence past this date yet confirmed.

Whilst the two programs are generally compliant with each other, there are several wrinkles in the detail that must be ironed out. The ‘state measures’ path has the proviso that CPP-covered electricity generating units (EGUs) fall under a federally enforceable ‘backstop’ standard, in the event of underperformance of the state-wide measures. Such a backstop’s jurisdiction would only include affected EGU’s, other cap and trade compliance entities would be free from this restriction. The white paper references how all previous modelling work forecasts that even in an absolute worst case emissions scenario, CPP-covered EGUs would still fall several million tons of CO2 within the federal backstop.

The new development in this respect is a staff proposal to set aside a pool of approximately 10 million CCA’s from the post-2020 caps, which would become available to affected EGU’s under stress of compliance with CPP. Since any repletion of the pool would flow from the program’s Allowance Price Containment Reserve (APCR), use of this pool would always reflect real reductions in emissions. The paper also details how if the backstop were ever to be triggered, there would be a common responsibility for all affected EGU’s to bring California back under CPP compliance. The burden would be divided relatively with respect to 3-year historic emissions.

One other fairly technical issue to be addressed is that currently covered entities can engage in inter-temporal ‘borrowing’ of emission credit. This is only permitted in several special cases, namely in allowing flexibility for only recently covered entities and dealings with the Allowance Price Containment Reserve. However, the CPP explicitly prohibits this, entities operating within the Cap and Trade system under CPP would not be able to surrender allowances from vintage years ahead of the year’s emissions they are mitigating for. However in this white paper, ARB staff seem to imply the current program is aligned with ‘the spirit of the law’, and such special circumstances are not problematic to overall compliance.

There are several other minor and ineffectual amendments necessary to mandatory reporting legislation; these include facility-level data being obligatory for affected EGU’s, onsite record keeping, and meter calibration standards.

All in all, there were no real surprises held within this most recent signal of intentions by ARB; the state’s CPP compliance seems to be progressing entirely irrespective of the Supreme Court’s most recent verdict. Indeed, if one were unaware of the decision, it would be impossible to detect any change of ARB’s attitude towards CPP compliance.

From a Canadian perspective, the release of Ontario’s much anticipated draft regulations for its Cap and Trade scheme is seemingly imminent. The province is moving through the regulatory challenges at great speed in order to hit its target of commencing trading in January 2017.

Meanwhile, the Canadian federal government in Ottawa is currently in negotiations with state officials over a proposal of a national minimum price for carbon in Canada. Working groups are being formed with the intention of publishing a national climate strategy in September.

Any minimum price ought not to affect Quebec’s existing arrangements within the WCI program, since the proposed $15 (CAD) minimum is deliberately designed beneath the auction the auction reserve price. However, this minimum is being described as too modest an effort to achieve Canada’s commitments made at COP 21. If these lobbying efforts are effectual, then the resultant higher minimum carbon price could initiate problems within the existent joint cap and trade program. For this reason, it will be worth keeping an eye on these national developments in Canada over the coming months.

Thursday last week saw both the official declaration of a permanent plug of the Aliso Canyon gas leak, and a staff presentation to the ARB Board on the same subject. After discussing all historic aspects of the episode at length, attention turned forwards to planning the mitigation efforts of Southern California Gas.

On January 16, Governor Brown directed ARB to draw up a climate mitigation program that would be funded by SoCalGas, in penance for the health and environmental consequences of the leak. The Company’s CEO had already written to the Governor in mid December promising to cooperate fully in the mitigation process.

The relevant headline of the presentation was that cap and trade compliance instruments would not be eligible in mitigation. The stated reason for this was that the program was not originally designed to include ‘fugitive’ emissions, and thus it would be an inappropriate area to draw reductions from given the State’s overall emissions strategy.

Instead, the core principles that will drive the formation of the mitigation plan are as follows:

–        The program must wholly and equivalently mitigate the aggregated leak’s emissions, current ARB estimates put this at 94,000 tons of methane (figure open to revision).

–        The program will need to achieve additional emission reductions, over and above existing state and federal measures.

–        Mitigation projects must be in California.

Additional secondary considerations included: environmental and economic co-benefits, a transformational effect resulting from mitigation, and specific positive outcomes for Environmental Justice communities. A deadline for full mitigation may yet be decided. Given examples of projects encompassed much of ARB’s current SCLP offset program: bio-methane infrastructure, organic waste diversion, and anaerobic digestion of wastewater.  The plan’s draft is due on March 7, the deadline then falls on March 31.

Notably, ARB has previously used methane’s 100-year global potential for official purposes. However, given the required immediacy of mitigation, ARB seems to now recommend using methane’s 20-year global potential. This technical change has a very dramatic impact; it will approximately triple the mitigation requirement. As an EDF representative outlined in the comments, the most modern scientific thought has methane equivalency at 84x to carbon dioxide.

In conclusion, SoCalGas are now placed to bear a heavy and comprehensive cross in penance for adhering to outdated gas storage regulation. To reiterate, cap and trade instruments cannot and will not be used in this case, and thus the CCA market ought to remain unaffected in a direct sense. But given the scale of SCLP offset projects that SoCalGas will have to pursue with private money, this is likely to have an impact on the market for offsets. Such a heavy and specific demand of projects, may well weaken the flow of offsets that can be used in cap and trade compliance. However, today’s record low CCA prices to auction floor, combined with the burgeoning surplus of allowances, in some degree limits the absolute importance of offsets in cap and trade compliance in the shorter term. 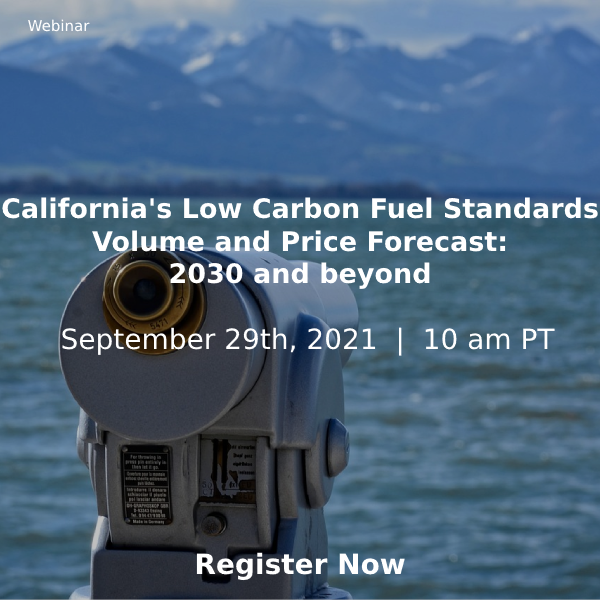