In last week’s scoping plan workshop, ARB emitted a variety of signals and hints to their post-2020 regulatory direction. Some of these were subtle, others more explicit; but on balance ARB seemed to be emphasising the virtues of Cap-and-Trade ahead of the other options of direct regulation and a carbon tax.

On a level beyond this, possible alterations to Cap-and-Trade in California were offered, many building on the discussions in last month’s Cap-and-Trade workshop. But it is when these two decision process are laid alongside each other, one can discern more clearly ARB’s motives for cap-and-trade redesign.

The paths and their policies

Before delving into ARB’s indications of preference between the Scoping plan alternatives, it is worth reviewing them in their most recently presented form, and where ARB anticipates the emissions falling.

The ‘Draft Scoping Plan Policy Scenario’ represents the benchmark for comparison, and is also the path inclusive of cap-and-trade. This was ARB staff’s preferred option, and has been stated as such several times over the last few months – note the name.

The first alternative is Direct Regulation: it enhances the stringency of some existing measures, but also requires new direct reductions across the carbon economy.

The second is for a carbon tax, it uses the complementary measures of the Draft Scoping Plan,

The consequent presentation gave further clarification on weighting of emission reductions between the above policies. The headline statistic was that ARB demonstrated how cap-and-trade (or carbon tax) must find 88-92 MMT in reductions to achieve the 40% beneath 1990 levels by 2030 target, and thus equal the reductions found under the Direct Regulation scenario. 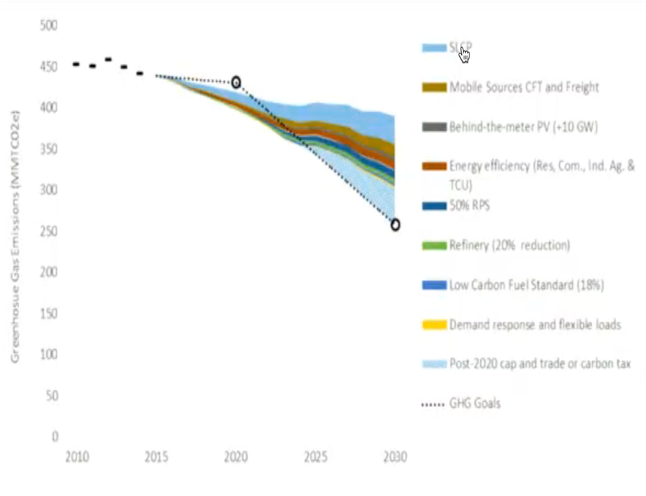 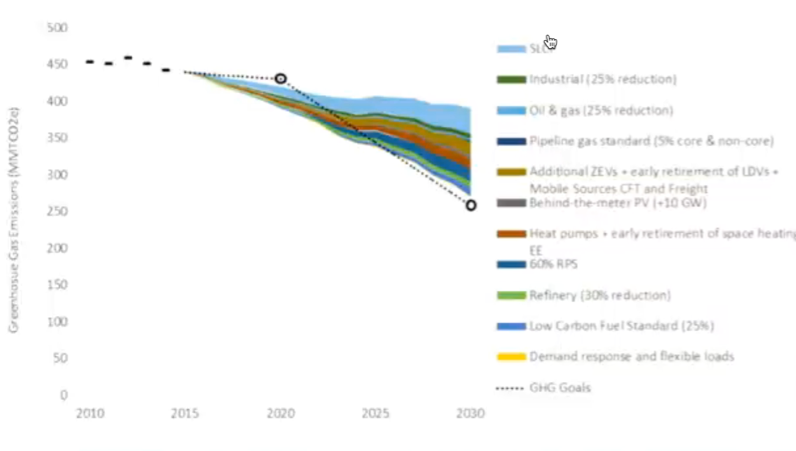 ARB weighs up the options in full public view

A substantial and crucial part of ARB’s presentation revolved around assessing the costs and benefits of the respective policy scenarios. It was in this debate where the regulatory body gave its most explicit and vehement support for the cap-and-trade path. Yet here too ARB exposed the perceived limitations of cap-and-trade and their likely remedies – the real crux of the issue.

In favour of cap-and-trade, the regulator references the relative certainty of emission reductions due to the declining cap. Intriguingly, there was no mention of the prioritisation of ‘direct emission reductions’ mandated by the new AB 197 (see here for more details). It seems ARB could argue that cap-and-trade does impose ‘direct emissions reductions’ but on capped sectors as a whole unit as opposed to individually. This would circumnavigate a legislative threat to cap-and-trade. With reference to the Carbon Tax path, ARB emphasised how the measure does not include an explicit emission reduction mechanism and must rely on elasticity provided by the cost of the tax. They are now explicitly aware of this major flaw, and how the lack of a certain environmental outcome is at odds with a central principle of AB197.

Secondly, ARB emphasised the relative advantage cap-and-trade has in minimising emissions leakage out of state as it will in theory find the lowest cost reductions. This is in stark contrast to their presentation of ‘alternative 1’ on this issue, where each industrial sector measure would need to be designed to avoid emissions leakage, and the limited compliance flexibility offered in this option would only accentuate the likelihood of leakage. This leakage minimisation clause represents a concrete and legislative-backed argument for cap-and-trade over its alternatives. It is one that the ARB could really fall back on when negotiating with the Environmental Justice Committee (EJAC – see here for more details) and other groups opposed to cap-and-trade.

The other flexibility of cap-and-trade that ARB highlighted over the Direct Regulation path was that of policy underperformance or late implementation, for this eventuality ARB modelled a 30% ‘haircut’ to emission reductions from direct policies. In their results below, cap-and-trade successfully shoulders the additional burden; whilst under Direct Regulation, there is less flexibility and an emission shortfall emerges that would require emergency measures. 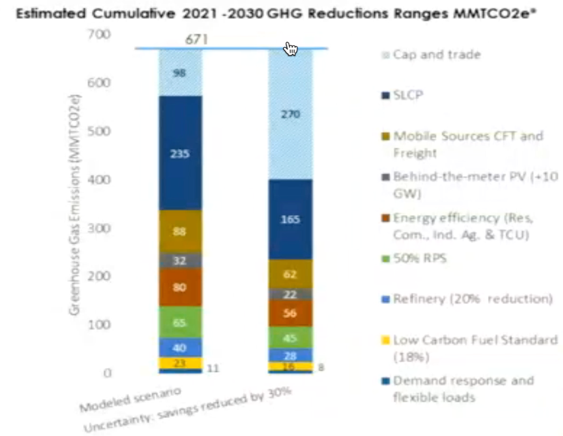 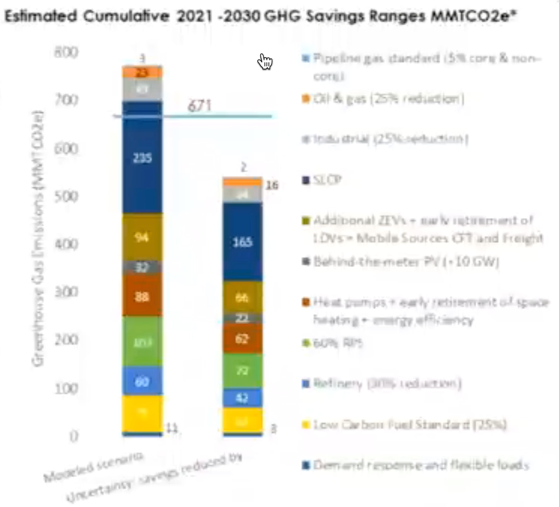 Another point of contention was the diminished possibility for subnational collaboration under either the Direct Regulation or Carbon Tax options. This compares to the historic progress of cap-and-trade in California, which has already acquired two linkage partners in Canada, and likely more anticipated in the near future. The climate leadership position that California has and enjoys to revel in is another sacrifice ARB seem well aware of in the course of changing paths. Also noted was the conspicuous lack of a Greenhouse Gas Reduction Fund under Direct Regulations; the uncertainty of Clean Power Plan compliance (if indeed it does survive) only extends this list.

Finally, ARB presented the results of their REMI modelling portraying, in macroeconomic terms, how a low carbon price scenario (cap-and-trade or Tax) would equate to less of an opportunity cost than direct regulation. The carbon pricing outcome delivered around 50,000 more jobs and $13 Billion more in GDP in 2030 than the ‘Alternative 1’ measures. Particularly in reference to the AB197 stipulations, this is an important admission, as there is a requirement for full social cost analysis of regulation and the economic cost is central to this evaluation.

It is key to remember that the above is not merely a theoretical piece extolling the virtues of cap-and-trade versus regulation or a carbon tax. This is the evaluation that ARB publicly presented to a well-packed auditorium in Sacramento. It reads as the former, but must be understood as the latter.

ARB wants and needs to demonstrate they are fully considering other options rather than merely paying lip service to opposed groups. This extended public process is just that – a full consideration. It does not prevent ARB from publicly assessing the paths, and indeed offering a clear staff favourite. At the moment, the ‘winner-between-the-lines’ is cap-and-trade.

That is not to say that cap-and-trade looks likely to emerge on January 1, 2020 in its current form. Alterations suggested in last month’s workshop were amplified by repeated mention last week. It is highly likely that these alterations will prove to be the theatre for give-and-take negotiations, with groups like EJAC stage left, and Big Corp. stage right.

The transparency and accountability amendments stemming from AB 197 are taken as a given. The three other issues repeated across both workshops are as follows:

The offsets change would both appease EJAC as it is one of their central complaints, and serve to tighten the market by allowances. For the former reason this edit looks likely, and so the California and WCI offset community must to be fully aware of this possible sacrifice by ARB and might do well to campaign against it.

The alteration to allocation methodology would reflect the declining cap; details and options for this were laid out in the staff materials by ARB for the October workshop. This move would not serve to tighten the market, but instead bolster auction demand, and, by the next decade, likely the clearing price too.

Retiring pre-2020 unsold allowances is another plank of the bridge between decades, but crucially this would require the assent of linkage partners. However, this may prove harder said than done, as Ontario has a significantly more aggressive emission reduction schedule than California or Quebec, and thus the mass retirement would increase the costs of their low-carbon transition. This would represent a politically stressful move in an already fraught Toronto environment.

In all, the scoping plan workshop served to reinforce what was described in the Cap-and-Trade workshop. The change to allocation methodology looks rather concrete, the limitation of offsets is more contestable and ripe for heavy lobbying from both sides of the debate, whilst the retirement of unsold allowances is too dependent on external factors to predict reliably at this stage.