“On balance it is clear that the Proposed Scoping Plan Scenario is the only alternative to meet all the criteria.”

‘the economic analysis in Chapter Ill, clearly demonstrate that the most secure, reliable, and feasible clean energy future for California… lies in extending the Cap-and-Trade Program through to 2030.”

The three statements above are all direct quotes from ARB’s proposed Scoping Plan. It was released on Friday, minutes after President Trump’s inauguration, and so perhaps a silver lining to an otherwise bleary day for Californian environmentalists.

The balance of arguments presented in this mammoth 157-page document was clear in its preference: “Cap-and-Trade please” not the ‘token’ alternatives discussed below. Indeed so much of the extended analysis only involved Cap-and-Trade that the brief evaluation of alternative paths seemed more a justification of the selection of Cap-and-Trade, rather than a genuine discussion of their respective merits.

The proposed plan poses two new alternatives: EJAC’s recommended options of  ‘Cap-and-Tax’ and ‘All Cap-and-Trade’. Nonetheless, uncertainty over the post-2020 program ought to have abated slightly, such is the explicit preference and share of analysis devoted to the proposed Cap-and-Trade option. This should be the key take-away from this incarnation of the Scoping Plan. As they say, the rest is all detail.

The major new commitment in the proposed Scoping Plan involved the refinery sector. Refineries are set to receive direct regulations to reduce GHGs by 20%, whilst retrofit control technology (RCT) will be implemented to reduce other air pollutants – enabling a co-benefit of reduced GHG emissions. The refinery measure text also includes direct references to EJAC’s concerns of how the largest sources of emissions are often placed within disadvantaged communities. Reductions on these sites would likely be correlated by reductions in criteria pollutants in these same communities.

Throughout the Plan’s text, ARB’s deliberate emphasis of environmental justice plus-points was clear, the regulator seemed to be currying as much favour as possible with the advisory group. This was possibly because they anticipate the eventual rejection of EJAC’s recommended path of ‘Cap-and-Tax’, or maybe to shield themselves from ex-post criticisms of how they ‘ignored the committee’.

The below table, fetched from the Plan itself, outlines the anticipated reductions from known commitments (i.e. reductions from measures resulting from existing legislation):

One of the most consistently emphasized advantages of Cap-and-Trade is its ability to fill the void if other measures were to underperform. In the below diagram, Cap-and-Trade is liable for 191 MMTCO2 under normal performance, but shoulders 342 MMTCO2 at the lower bond of measure uncertainty. The second diagram displays anticipated emission reductions by sector. 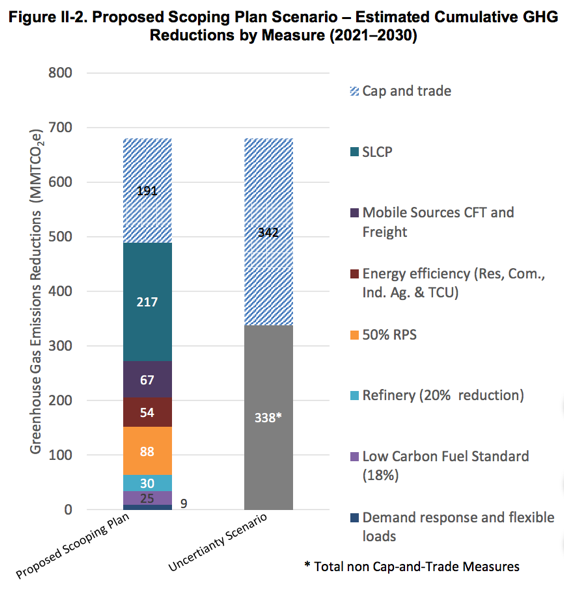 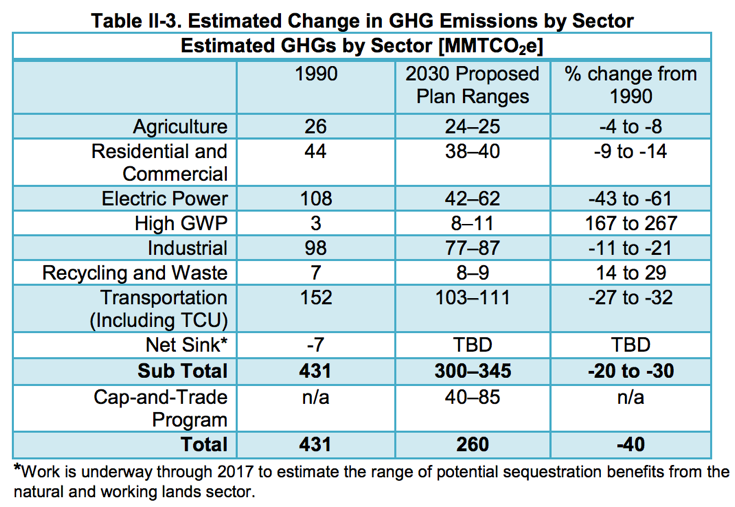 ARB also made a major leap in defining Cap-and-Trade as a direct emission reduction from 80% of the State’s economy. This inclusion strengthens the case of the market with respect to the key AB 197 stipulations. ARB had not previously labelled Cap-and-Trade as direct and so this development is noteworthy in this respect, it shows the gathering of arguments in defence of the selection of Cap-and-Trade.

Plan’s discussion of alternatives to Cap-and-Trade

The analysis of the ‘Direct Regulation’ alternative highlights the legislative and implementation barriers that heighten the chance of program delay, and increase the uncertainty of outcome. Also mentioned is the lack of any form of proceeds to a Greenhouse Gas Reduction Fund (GGRF) equivalent, the increased likelihood of leakage, and no availability for Clean Power Plan compliance.

There is also a new alternative – ‘All Cap-and-Trade’, This would extend the market’s coverage in lieu of the refinery measure and an increase in LCFS stringency. This option receives very little attention however, and thus does not necessitate further review.

For the pure ‘Carbon Tax’, the listed disadvantages include how there would be no direct reduction provisions, the abandonment of program linkages, the lack of CPP compliance, and the difficulty in price-setting. A variant for a flexible tax is proposed, the tax level would be modified after an annual review using GHG inventory data. Although the option is criticised for removing the only real benefit of a tax, i.e. certainty of the carbon price. In addition to this, British Columbia’s debatably failed carbon tax is used as a data point exemplifying the issues involved with this path.

EJAC’s new recommendation of a ‘Cap-and-Tax’ is the alternative accompanied by the most discussion in the report. The structure is as follows: every entity covered under the current Cap-and-Trade would be designated an individual declining cap for 2020-30, every year the entities would pay a flat carbon tax per ton of emissions, and no trading would occur.

The advantages of this alternative are listed to include the tax payments that could be used as a GGRF equivalent, and the added outcome certainty that the capping function brings. Although there is not the same flexibility as Cap-and-Trade in the case of reduced effectiveness or delayed implementation of the other climate policies. Many of the disadvantages of the pure carbon tax hold equally true here. In addition, the difficulty of entity level cap-design is problematic: it would take several years to process due to its complexity and the accompanying lobbying battle.

But perhaps most importantly, this would not be the lowest-cost path, as increased onsite investment would be required from entities, in addition to the tax payments per ton. In the debate ahead, this failure for cost effectiveness will surely be the main sticking point for this alternative. The increased costs to the state’s consumers and heightened chance of emissions leakage are two of the legislated targets of California’s regulation, neither of which are satisfied by Cap-and-Tax.

The most quantifiable analysis of Cap-and-Trade and Carbon tax is the report’s review of their compatibility with AB 197’s requirements – i.e. their cost effectiveness ($/ton), their criteria emission reductions, and their net climate benefits (social cost of carbon mitigated). The two alternatives return the same results but for their cost effectiveness, where the tax gives a $50 /ton removed, whilst Cap-and-Trade gives a range of $25-$85 – between the anticipated 2030 auction floor and the APCR entry price.  To give some context: the consensus market forecast for the 2030 carbon price is more closely aligned with the lower bound than the upper.

Whilst ARB has sought to justify Cap-and-Trade above the alternatives in this plan, it does not suggest that Cap-and-Trade will continue on in its current form.

All of the above refer directly to EJAC’s recommendations/demands, in that they would increase direct facility reductions, whilst the final point directly targets the health of surrounding communities. In all, this would seem to be ARB giving ground to EJAC, in anticipation of rejecting their ‘Cap-and-Tax’ recommendation. When the debate is phrased in this give-take manner, the WCI offsets community ought to be even more concerned. See CC.info’s ‘The Battle for Offsets’ series for more colour on this debate.

Notably, the above bullet points exclude any reference to the possible cancellation of withheld allowances in 2020. This was likely judged too drastic a move as it would have changed the fundamentals of the market, and thus have drawn heavy criticism from entities who have been strategising under for the current status quo. Instead the only remaining way of tightening the market would be reducing the offset usage limit, further fuel to the fire.

Complementary measures in the Proposed Plan

This new plan also brought a significant expansion in the scope and depth of the program’s complementary measures. The new areas of focus for ARB revolve around working lands, biomass and waste – new ‘Action Plans’ are anticipated in these areas. Also detailed was an extension to some existing programs, as listed below:

If successful, the newly proposed complementary measures and the increased stringency of existing ones will ease the pressure on the market mechanism. However, many of these programs come at significant state cost, and lower-than-par auction revenue could lead to the State and taxpayer reaching further into their pocket.