CaliforniaCarbon.info, February 25, 2015: The first auction for the second compliance period of the joint cap-and-trade program between California and Quebec cleared a record-breaking volume of 73,610,528 current vintage allowances. The current auction cleared at $12.21 ($0.11 above the floor) with a bid-ratio of 1.14. The low clearing price and bid ratio, combined with the huge volume cleared at this auction, is largely thought to be a bearish result for the market. The advance auction, which offered 10,431,500 V2018 allowances, barely cleared, with a bid-ratio of 1.02 and a clearing price matching the floor at $12.10. 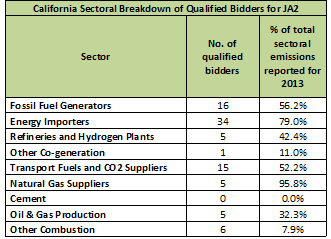 It seems Quebec entities have still not shown their true demand at this auction with only 15 qualified bidders out of potentially 76. These 15 bidders that qualified for the second joint auction represented 31.3% of the total reported emissions for 2013 (not all bidders have covered emissions). 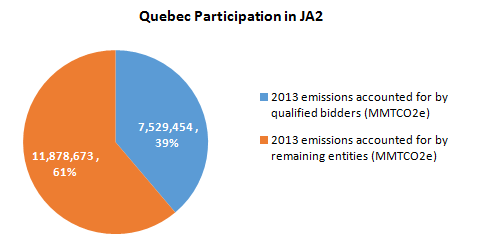 The entry of the transport fuels sector into the program is cited as a main mover of the secondary market this year, as they represent the largest share of the emissions among all sectors covered under the California cap-and-trade program. They seem to have exerted a similar influence on the auction. Fifteen of the qualified bidders in the auction have compliance obligations under the transport fuels sector, and they account for 52.2% of the sector’s reported emissions for 2013. Participation from this sector has certainly increased, although it seems that a significant portion of its demand for allowances has yet to materialize on the primary market.

It is highly unlikely that the current auction would bring upside secondary market movement, given the low clearing price and bid ratio. The gap of $0.52 between the broker-quoted OTC spot and the primary market clearing looks to be untenable. Furthermore, a bid ratio of 1.14 suggests most entities are likely to have received most of their revealed demand through the auction, and bid-side pressure is likely to decrease. With nearly 267 million V2015s still to be auctioned later this year, and the prospect of spot-heavy secondary markets especially after each auction, it is unlikely that many players will be in any hurry to buy on the secondary.

Sell-side interest may wane as well, with the market almost certainly guaranteed a gradual rise in price towards year-end when 2016’s price floor (rising 5% plus inflation) begins to be priced in, and possible even a spike or two heading towards the compliance surrender deadline in November. A trader speaking to CaliforniaCarbon.info stated, “Prices are currently so low that many market players might as well wait closer to next year before selling allowances.”

What would be interesting to watch is if the falling front-end allows a reopening of the intra-year front-to-back spread, which had previously sunk to under 1.5% and potentially reduced the incentive for carry trade providers to take on first legs closer to the front.

After the record-level activity we saw the secondary market reach at the start of the year, it seems the market may now have to readjust at much lower levels. Immediate impacts on the secondary market prices have been negative. The V2015 Mar 15 contract on the InterContinental Exchange (ICE), which closed at $12.65 yesterday, has earlier today been trading in the $12.30-$12.45 range.