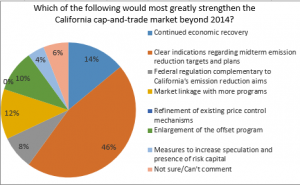 The survey reached a number of interesting conclusions regarding stakeholder opinions and concerns in this market. Some of the stand-out ones included:

– 60% of respondents are concerned that, whether or not it passes, the Steinberg bill is a threat to California cap and trade

– More respondents thought California would be the only Pacific ETS, than that the four Pacific collaborative signatories would come together into a single regional ETS.

Click here to watch the survey review webinar on playback